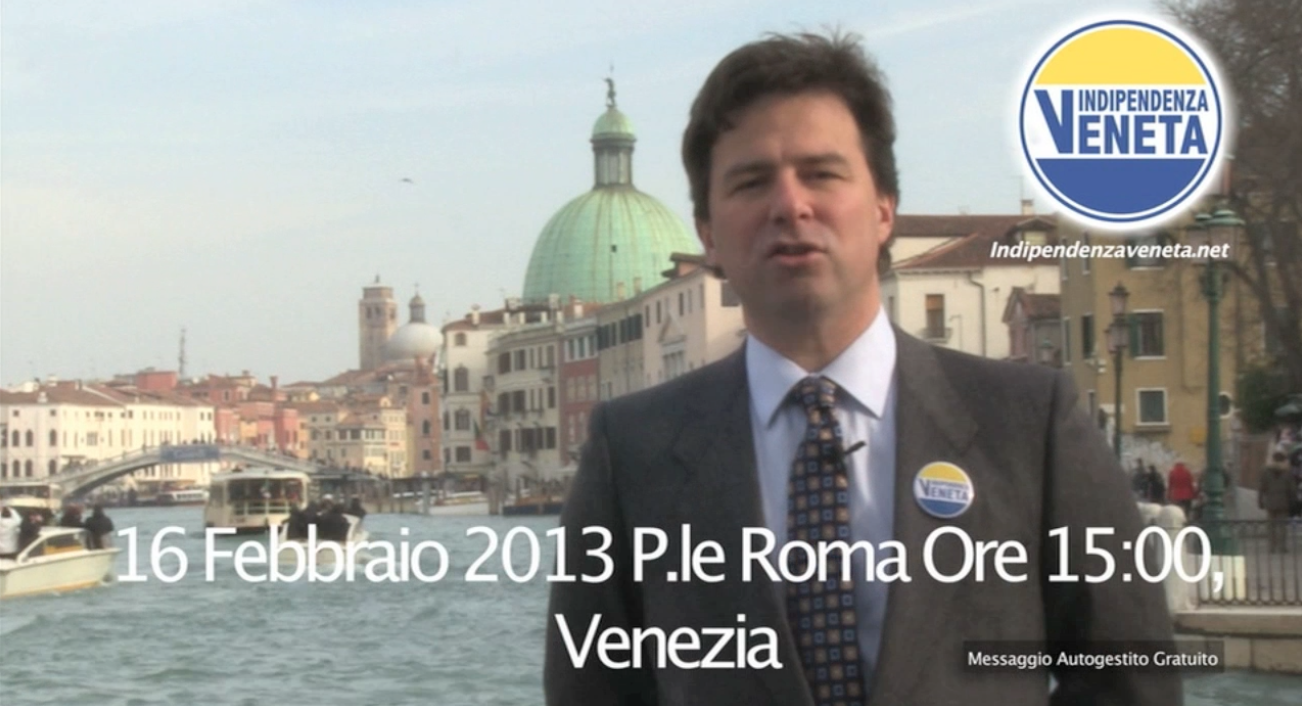 This Saturday, a massive rally will flood the streets of Venice to pressure in favor of a regional law for the rebirth of the Venetian Republic. The Referendum date set for October 6, 2013. Most recent polls show 57% in favour. 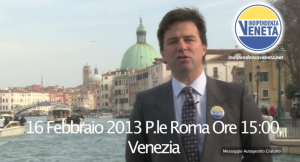 VENICE – “Do you want Veneto to become an independent and sovereign Republic? Yes – No.”

This is the simple question which will be carried by at least ten thousand people through the streets of Venice this Saturday, all the way to the headquarters of the Regional Council, right on the Grand Canal of this historic city.

This is the very same question presented in Article 1 of the regional bill for the independence of Veneto that the movement Indipendenza Veneta will present to regional representatives, now that a date has been set to hold such referendum this October.

Last November, a very wide majority of the Veneto Regional Council approved Resolution 44, engaging Regional President Luca Zaia of the Northern League to uphold Venetians’ U.N.-guaranteed right to self-determination and to take urgent action with the United Nations and the European Union to ensure the holding of such referendum.

Last Sunday, February 10th, a committee of five jurists has published a law proposal they were commissioned to draft last December. The proposal states the minimum quorum for the referendum in favor of the independence of Veneto must be of an absolute majority in order to consider the vote valid.
The proposed date for the referendum is set for October 6, 2013.

The movement Indipendenza Veneta has organized a massive rally in Venice for this Saturday February 16, and at least ten thousand people are expected to participate in the narrow alleys of Venice, as they have in recent events.

The rally ends in front of Palazzo Ferro-Fini, headquarters of the Regional Council. Each rally participant may undersign the historical document that will be then ferried by gondola over the Grand Canal and received by Regional Council members who are supporting the referendum.

“Recent polls show that 57% of Venetians will vote YES on this referendum” stated prof. Lodovico Pizzati, head of Indipendenza Veneta. “We will hold a referendum on independence just like Scotland and Catalonia and together we will reshape Europe for the better.”

The Veneto Region holds 5 million people in North Eastern Italy and its capital is Venice. Its boundaries are almost equivalent to those of the Most Serene Venetian Republic that dominated for centuries the Mediterranean until Napoleon put an end to it in 1797. Veneto was then annexed to Austria and subsequently to the Kingdom of Italy in 1866 as an outcome of the Austro-Prussian war. As a vote was requested of the people of Veneto (a rigged “plebiscite”, as proved by many historians) to join the unified Savoia family empire in 1866, it seems only just that the people of Veneto will now be asked if they want to renew the vow or regain their independence, which they had held for 1100 years as a sovereign nation.

13 risposte a “Referendum for Venetian Independence proposed for October 6”