Indipendenza Veneta | A new Venetian Republic is no fantasy

I was pleased to read a recent article on the Global Times that described the push for Venetian independence supported by thousands of people rallying in Venice. The article did a good job at describing memories of the Most Serene Republic of Venice that for centuries traded with the East, a Venetian Republic well known in China thanks to its most famous ambassador, Marco Polo. The article was not accurate when describing the political movement Indipendenza Veneta as a branch of the Northern League, the oldest political party present in Rome’s parliament. Most members of Indipendenza Veneta are young people, or generally persons who never were involved in politics, but that recently felt a duty to participate in the political process because of the drastic economic and political situation in the region of Veneto and its capital, Venice.

The reason I feel compelled to write in reply is the fact that I am called into question on not telling my supporters about the costs, political and economic, of running a new Venetian Republic. I think this is an excellent question, which is actually asked very often by newcomers that take the option of independence very seriously and not merely as a mean to protest a dire economic situation.

In fact, it is the presence of the European Union, a common area of free movement of labor, capital and goods, that lets small countries flourish even more than big nation states like Italy, Spain and the UK, who perhaps had a size advantage during the belligerent and colonizing 19th century. In a global economy political boundaries become less important, especially for the very integrated European Union, because for a firm the world is its economic boundary, no matter if your business is in little Slovenia or in big Italy, in little Denmark or in big Germany.

What makes a difference is that being part of the European Union has its economies of scale, making the political costs much lower for smaller countries. You get the benefits of a big community with a common currency, a common defense system, a common diplomacy, which are public services that would otherwise be more costly to run independently. At the same time though, you get a more efficient public service in a small country because citizens have a closer control on the political decision making.

This concept of a relationship between the emergence of new countries in a globalizing economy has long been observed and studied. Twelve years ago Alberto Alesina et al. gave an econometric backing to this theory in an academic paper published in the American Economic Review titled “Economic Integration and Political Disintegration”. This seminal research study then became a very influential book: “The Size of Nations” MIT Press, 2003. In essence, the creative destruction that is true for obsolete firms can also be applied to countries like Italy that are unable to reform themselves and are therefore impoverishing their citizens. Political boundaries are not eternal; they are set by people and may change due to a changing world.

10 pensiero su “A new Venetian Republic is no fantasy” 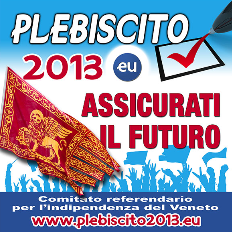 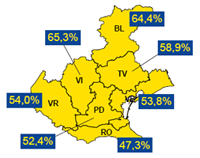